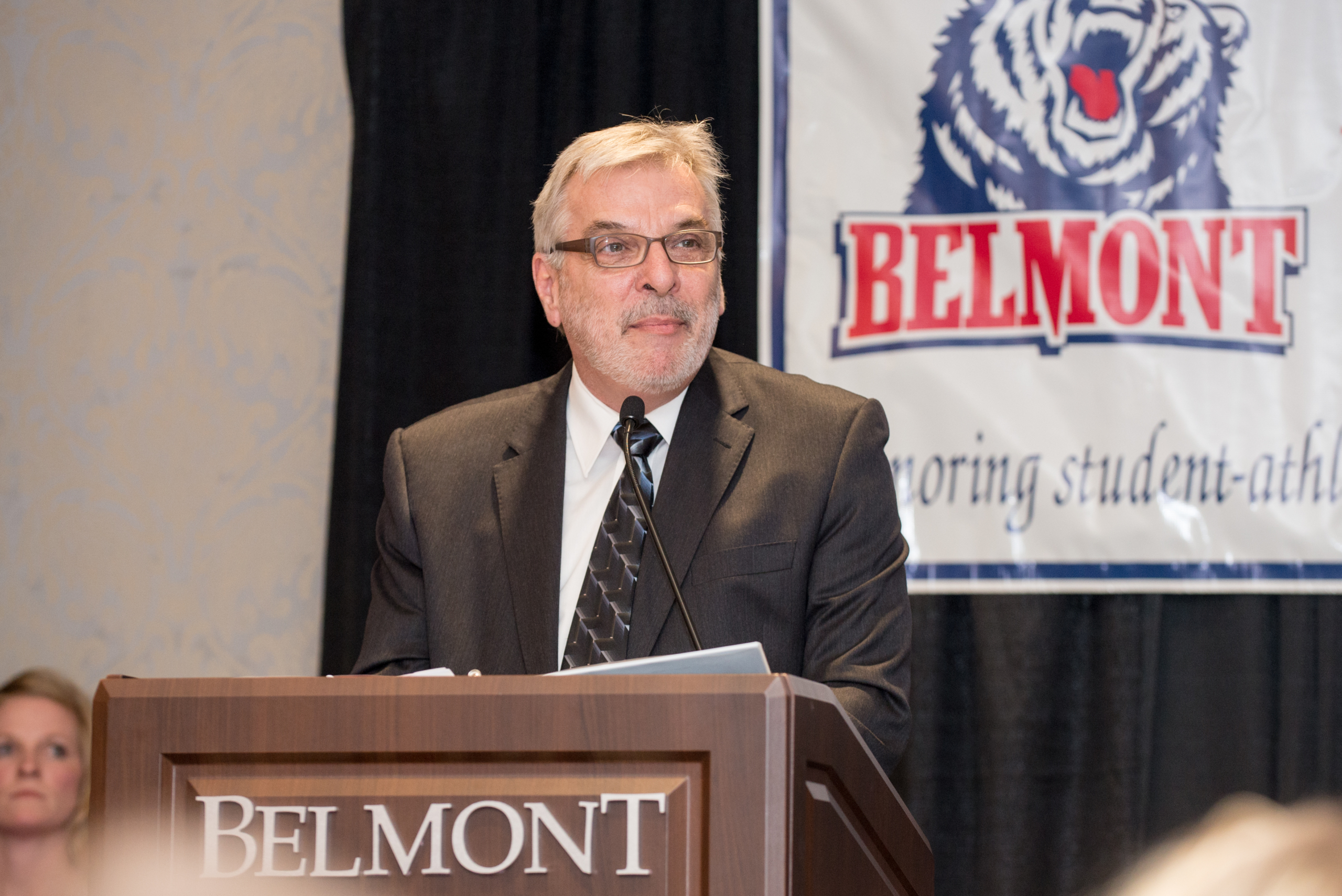 Belmont University and its athletic department has seen a lot of change over the past decade. With those changes has come new buildings, athletic centers, a larger student body and more championships.

With all of this progress and development, though, some things stay the same. Rich Tiner, former professor at Belmont, has been a mainstay for the Bruins as the lead broadcaster for women’s basketball and baseball for over 20 years.

Tiner has been the voice for so many huge moments in Bruins women’s basketball and baseball, including OVC Tournament games and NCAA Tournament runs. He has seen coaches come and go and players rise to heights of which Belmont has never seen, but it all started when he was eight years old setting up baseball cards in his bedroom and creating games in his head where he led the play-by-play.

“I absolutely loved baseball and I sat on my bed in the summer with the window open and two stacks of baseball cards, each one arranged into a lineup, and I made up baseball games in the grass outside my window,” Tiner explains to The Sports Credential. “I kept score and everything, I just made it up and called play-by-play of a game that I was imagining in my mind. It goes back that early for me.” 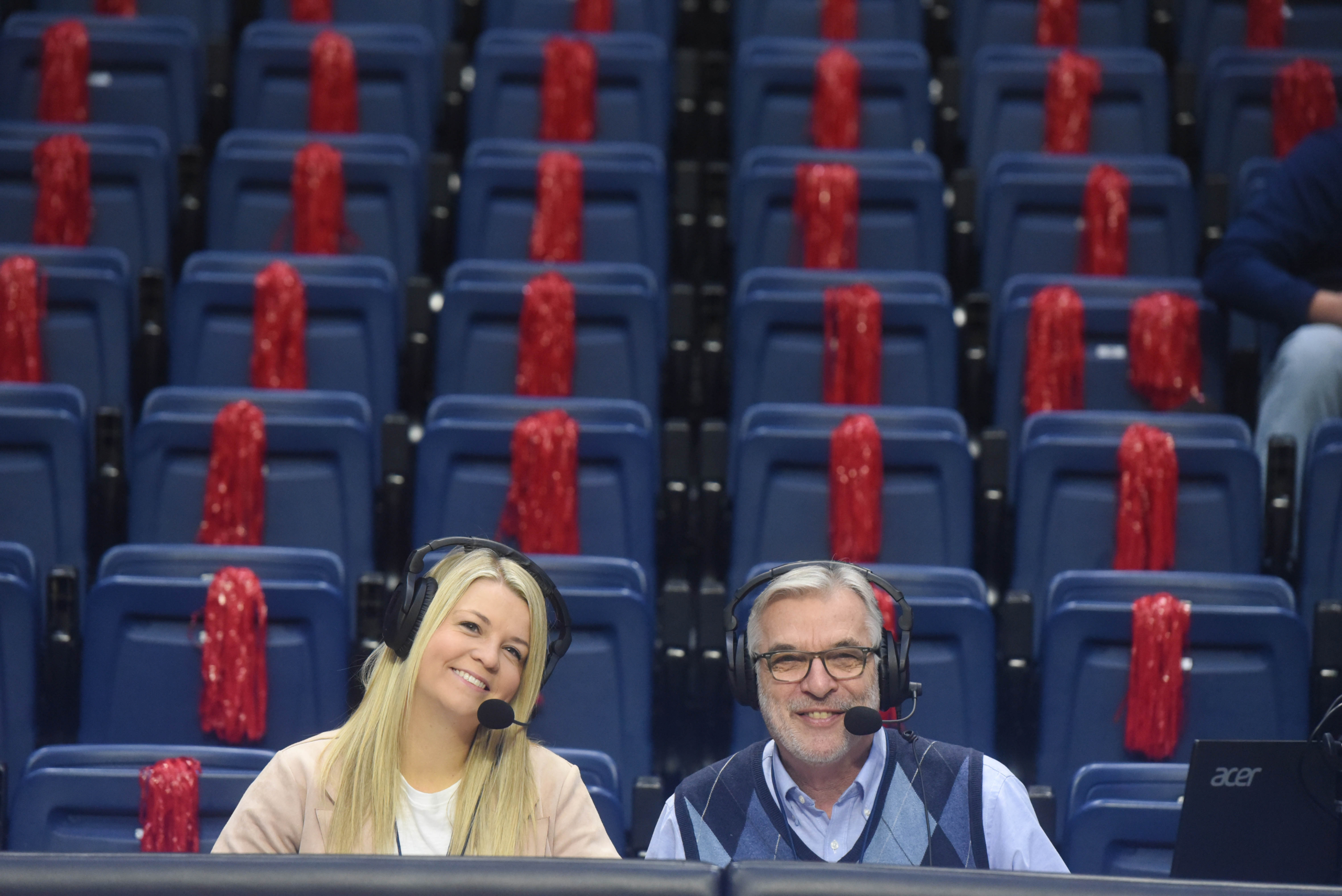 A product of Texas, Tiner grew up in the heart of high school football country where he got his start as a spotter for radio broadcasters and PA announcers. With his first opportunity, Tiner had a huge roster in front of him and would place a pen by the the person running, tackling, and catching so the play-by-play person could just glance down instead of memorizing the names and numbers of huge teams.

“My dad was close friends and worked with a guy who called high school football down in south Texas,” Tiner recalls. “My dad kept stats for them before live stats and computers. When I was between 12 and 13, I would go with my dad and be a spotter for the guy that was doing play-by-play.”

Throughout his college years, Tiner stayed in broadcasting but was also heavily involved in the Christian music industry, running and later owning stations in Texas, Washington, and eventually Nashville. In Texas when he and his father bought a station, they added high school football knowing it would be great for the growth and ratings. Tiner got back in the booth and began calling games over the air for the first time.

“I started doing play-by-play because I thought it’d be fun and, if I did it, I wouldn’t have to pay somebody else and there really wasn’t anybody else. It was a small town so I just started doing it, and I’ve been doing it ever since.”

Tiner has been an integral part of Belmont and Belmont athletics as the ‘Voice of the Bruins’ for over two decades and serving as Belmont’s Faculty Athletics Representative. He’s worked with student-athletes, the athletic department, and the NCAA serving as a member of the Division I Council.

Over the year’s, Tiner has seen so much change from the building where the Bruins play, to how they broadcast games to fans from around the country and world. 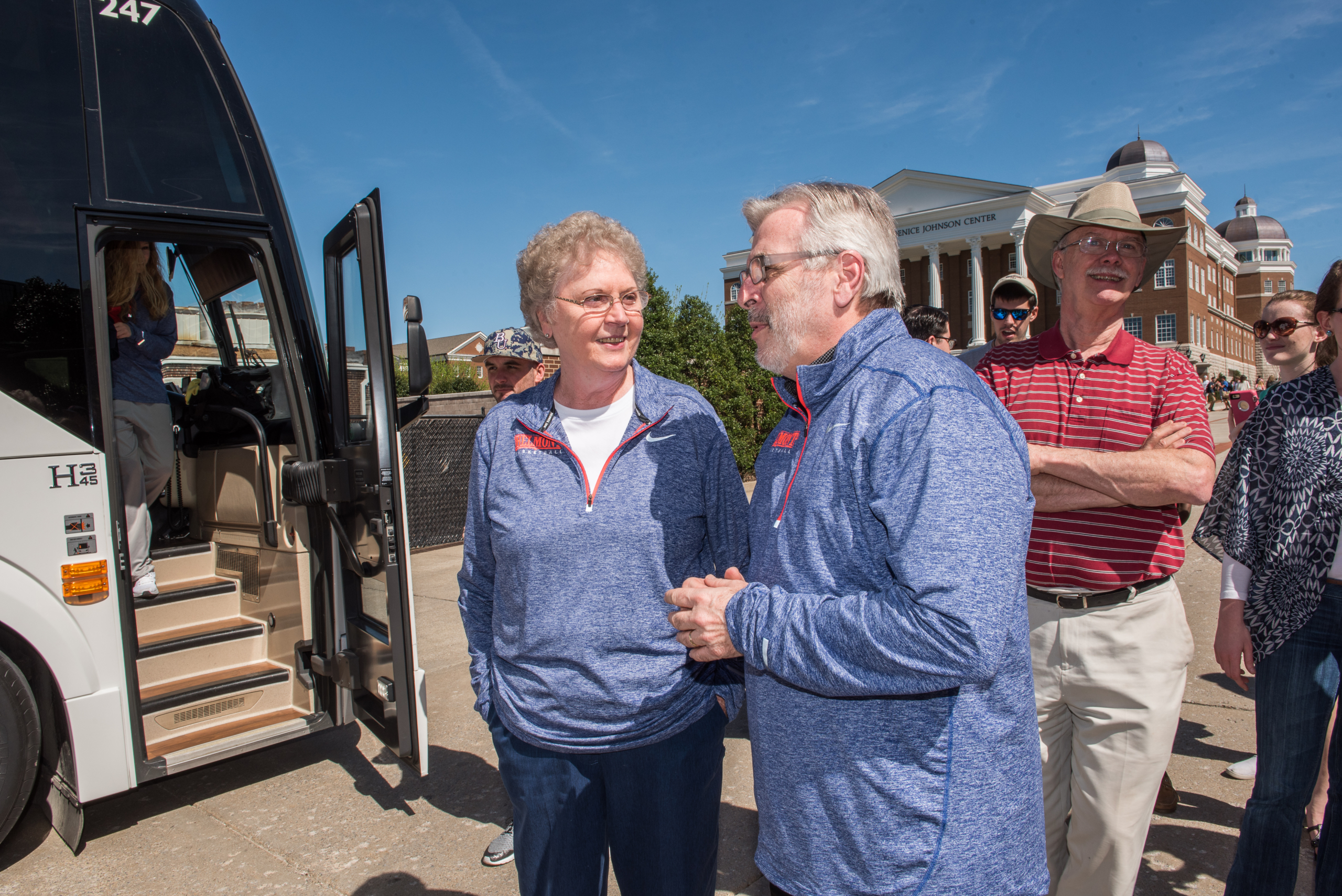 At the beginning, he was calling games that aired on the university’s radio station but, as the season’s rolled on and Belmont joined the Atlantic Sun Conference and eventually the Ohio Valley Conference, the Bruin’s moved from over-the-air radio broadcasts to live streaming video broadcasts with ASUN TV, the OVC Digital Network and finally ESPN+.

A lot has changed behind the scenes, too, as Belmont has grown in both size and finances. From the Strickland Arena to the Curb Event Center, the university has gone from a small production group to a huge staff of full timers, as well as students offering to help produce award-winning broadcasting.

“[The broadcast] got better because those first years were audio only,” Tiner explains. “We started with what was called ASUN TV, which was the Atlantic Sun Conference’s digital initiative. Between me and Greg Sage, who was also involved in that, we helped the ASUN develop that whole thing and improve it. Once we added the video component, we had to staff it, and part of that process was adding sports production coursework. We had students that were available to help with crew but, from their perspective, it was an opportunity for students to do real world lab work for their class.”

He continues, “They were doing live, multi-camera productions of sports contests for their for part of their coursework. Students loved it and they learned a lot. It was great experience for them! In those early days, those students that did well had jobs lined up because they were the first ones. There weren’t five million people that had experience doing sports production like there are now, so it was really a win-win on the academic side, for the athletics program, and for our students.” 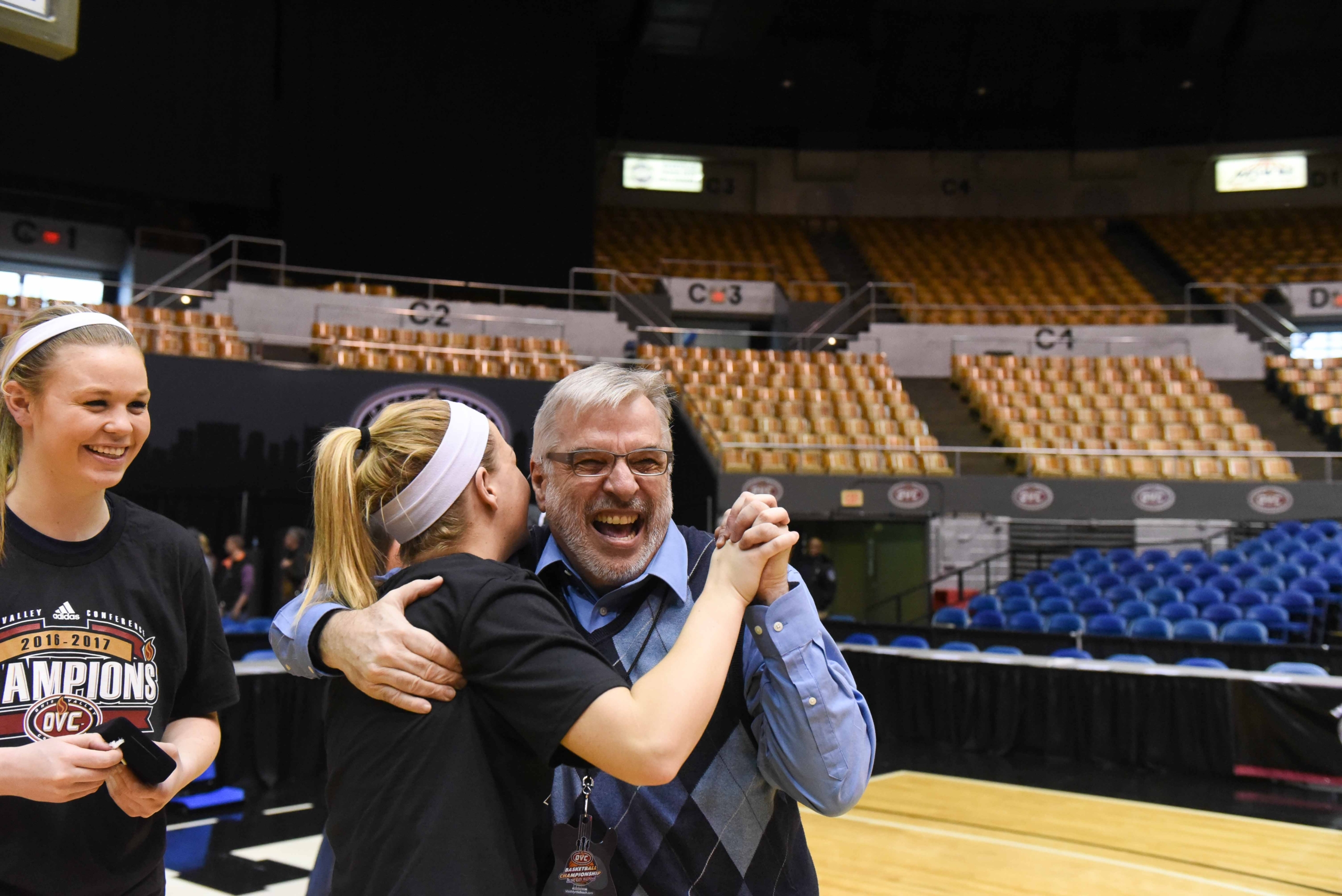 The work from Tiner, Belmont’s Associate AD for Broadcasting & Media Relations Greg Sage, former athletic director Mike Strickland and many more, gave students hands-on experiences that couldn’t be replicated in the classroom. Many Belmont alumni that worked with the athletic department producing these live broadcasts went on to become top-tier broadcasters of their own, including former WKRN sports host and current 247 host Emily Proud, WBIR Knoxville anchor Madison Hock and Broadcast and Digital Reporter for the Oklahoma City Thunder Paris Lawson.

“As the old retired professor, there is nothing that makes me happier than seeing these former students have such success. That makes my day when I think about them,” Tiner says fondly.

Through countless baseball games and women’s basketball championships, Tiner doesn’t think about calling it quits as he’s just having too much fun. He’s always been a professor first since coming to Belmont in 1996, but the love and joy he gets from calling games and seeing the hundreds of student-athletes grow from 18-year-old kids to young men and women is what takes the cake.

“I have this ritual that when I set up my broadcasting gear and I get finished testing everything out. I look out onto the baseball field or the basketball court and I just take this deep breath, and I say, ‘Wow, I can’t believe they pay me real money to do this,'” Tiner explains. “I’m still just like that eight-year-old kid sitting on the edge of my bed, making up a game in the grass because I love doing it so much. But this time I’m not making up a game. It’s a real game and it’s really awesome student-athletes. I love them all like they’re my own kids, so I feel pretty honored and blessed after all these years to still get to do it.”