After their most historic season, Belmont’s women’s basketball team will play in the 2022 Gulf Coast Showcase. The tournament will be held over Thanksgiving Weekend from Nov. 25-27 inside Hertz Arena in Estero, Florida, and will feature six NCAA Tournament teams from last season.

Joining the Bruins in southwest Florida will be Air Force, three-time national champion Baylor, Georgia Tech, Michigan, Saint Louis, South Florida and Villanova. Michigan reached last year’s Elite Eight, while Belmont, Baylor and Villanova all appeared in the Round of 32. Georgia Tech and South Florida also made the NCAA Tournament field this past March.

Seven of the eight participants in this year’s event made national postseason play in 2021-22, while half the tournament field won at least one game in the 2022 NCAA Tournament. 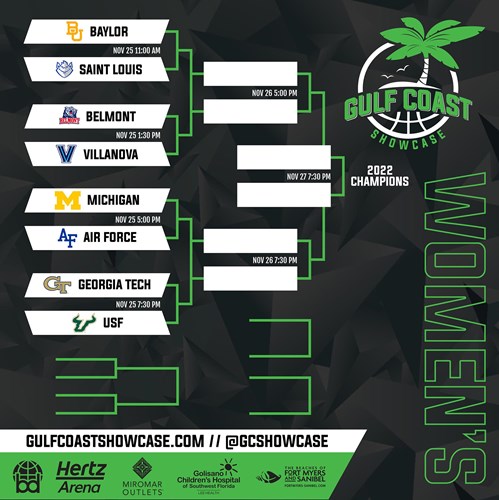 “This year’s Gulf Coast Showcase field is deep with six teams from last year’s March Madness field and some of the top coaches in the game,” says Gulf Coast Showcase Women’s Tournament Director and CBS/ESPN analyst Debbie Antonelli. “The Bears may enter as the favorite but there are some great teams, led by some outstanding coaches in this year’s field, so any of these eight could go home with the hardware on Sunday night.”

Belmont will face Villanova in the Gulf Coast Showcase quarterfinals Friday, Nov. 25 at 12:30 p.m. CT with the winner advancing to play either Baylor or Saint Louis in the semifinals. This matchup is the first-ever meeting between Wildcats and the Bruins.

The tournament bracket also includes consolation matchups with all teams guaranteed three games across the weekend.

Belmont reached its second consecutive NCAA Tournament Round of 32 as a No. 12 seed this past season with a thrilling, double-overtime victory over fifth-seeded Oregon. The Wildcats upset sixth-seeded BYU 61-57 in the First Round as a No. 11 seed.