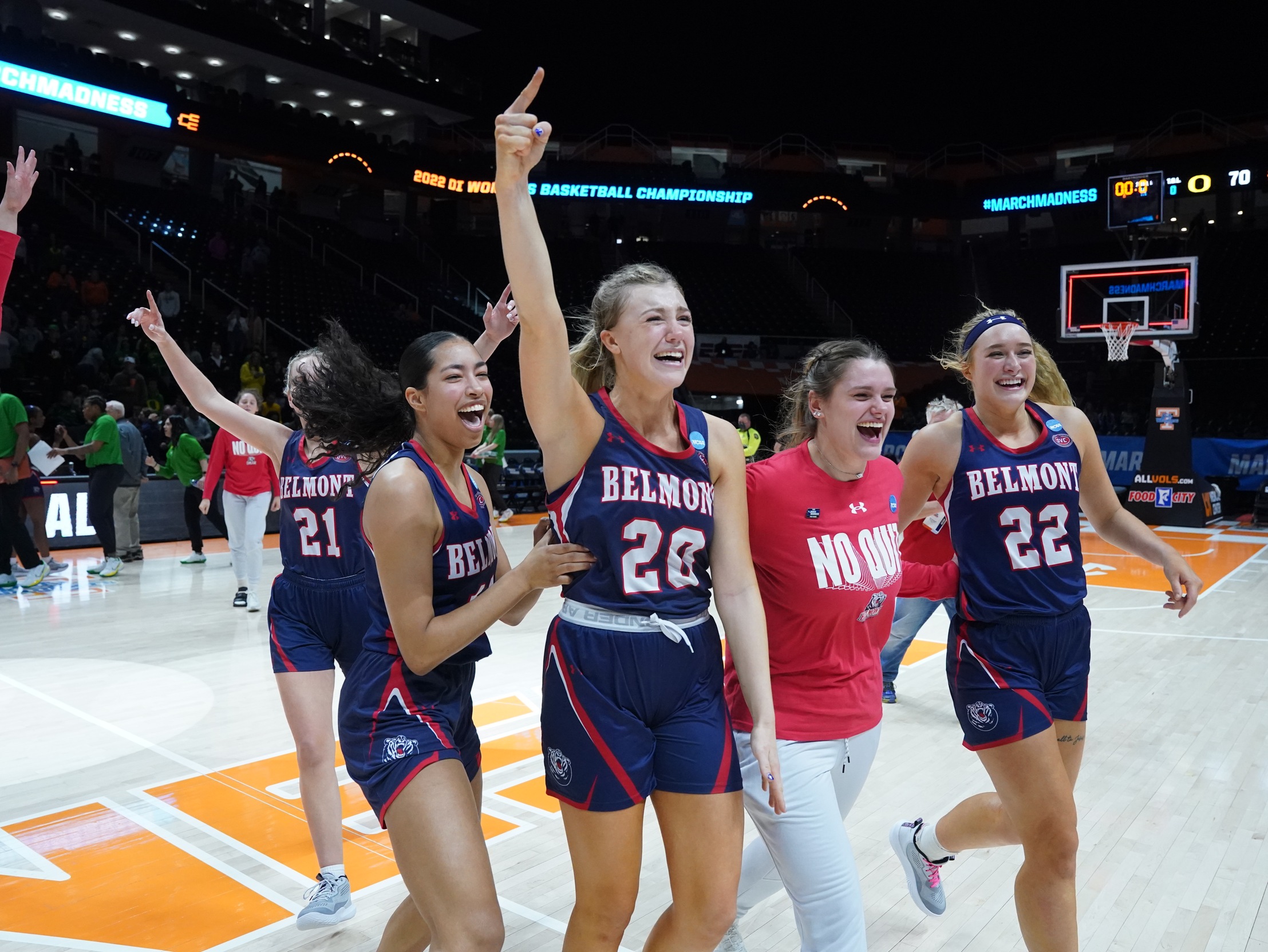 For the second straight season, the Belmont women’s basketball team busted brackets, upsetting a No. 5 seed in the opening round of the NCAA Tournament. They will now face the Lady Vols in Knoxville.

On Saturday (March 19), the Bruins a No. 12 seed knocked out Pac-12 powerhouse Oregon 73-70 in an intense double overtime win. This was the program’s second-ever March Madness win after beating No. 5 seed Gonzaga in 2021.

It was a back-and-forth battle from these two high-powered teams. The Oregon Ducks have gone to four consecutive Sweet Sixteen’s, but the Bruins, led by coach Bart Brooks, made huge defensive plays late in the game, displaying the team’s toughness and discipline.

“I would say as a team, throughout the year, we have always focused on being tough and being together,” said sophomore Bruin Madison Bartley in a press conference. “Yesterday we really showed the world that we can fight through adversity and we fought through every single overtime that we went through. I think even if we would have went one more, we still would have fought through and won that game. I’m just proud of our team for fighting and sticking through it together.” 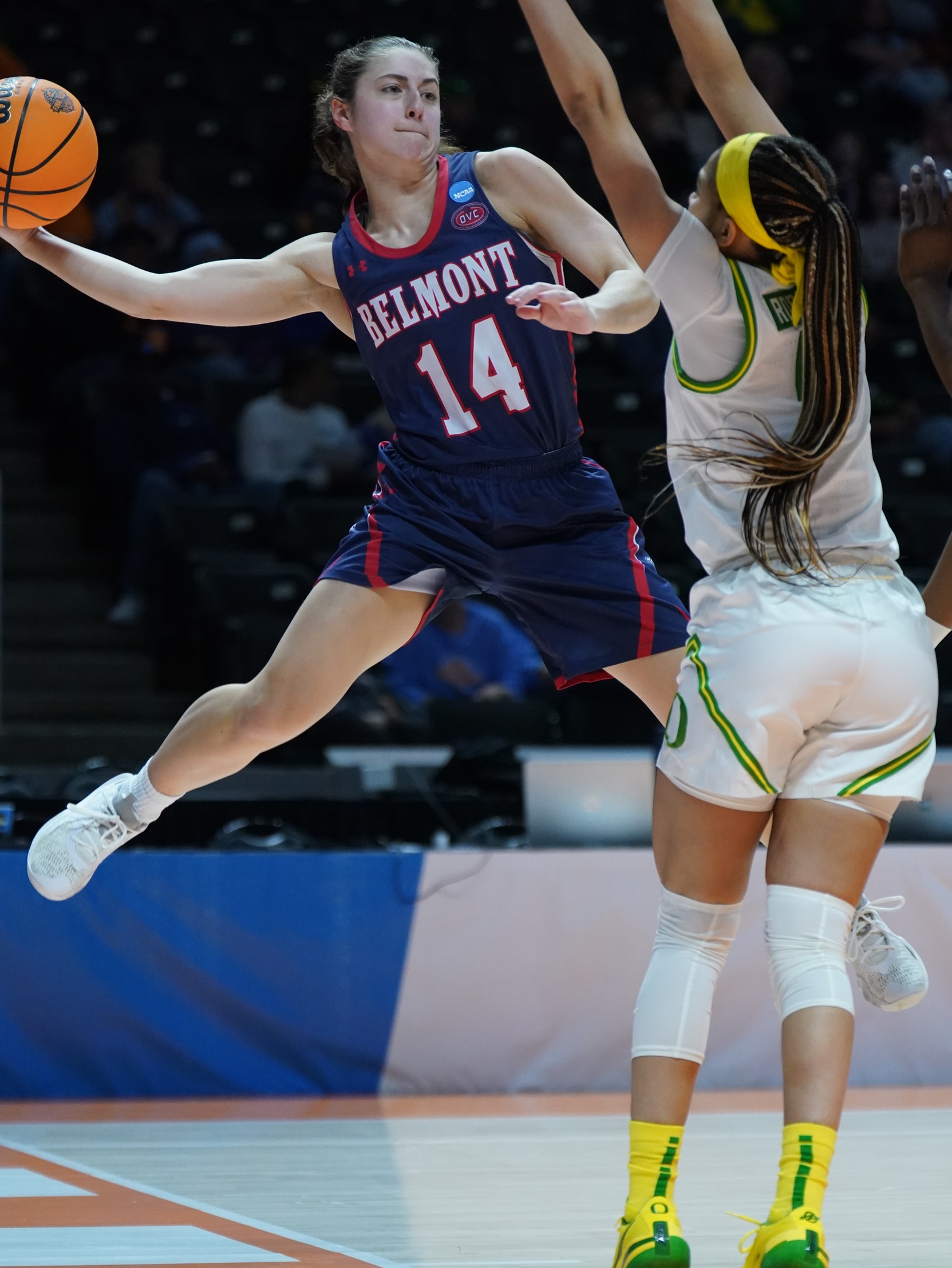 Belmont senior Jamilyn Kinney with a save that helped solidify the Bruin’s double OT win. Photo: Courtesy of Belmont Athletics.

Now the Bruins will face the University of Tennessee in the round of 32 at Thompson-Boling Arena on Monday night (March 21). The Lady Vols are currently ranked No. 18 nationally and earned the No. 4 seed in the tournament. They handled No. 13 seed Buffalo with ease, winning 80-67 on Saturday. Led by junior Jordon Hurston, who averages 16.2 ppg and 9.4 rpg, the Vols may be the toughest opponent Belmont has faced all season.

Tennessee’s team is stacked with some super athletic players, such as Tamri Key who stands at six feet-six inches and averages 10.5 ppg, 8.2 rpg, and has blocked an unprecedented 115 shots. Against Buffalo, Key scored 11 points and had 11 rebounds.

“I don’t think Tennessee has a shot blocker, do they? Do they have a good shot blocker? I don’t know. I’m kidding! They have a great shot blocker!” Brooks quipped in a press conference. “There’s a lot of similarities and a lot of differences. Tennessee is one of the best, most disciplined defensive teams that we’ll play against. They do a really good job of making things difficult… I watched a lot of film, and sometimes as a coach when you prepare for these games, you’re just waiting to get struck by lightning and have an epiphany about how we’re going to get it done. But I’m not sure I’m to that place yet.

“We’ve got a lot of stuff in our back pocket that we can use and our normal flow and concepts are going to get us some looks. As we play and as we understand how we’re being guarded in certain scenarios and situations, we’ve got to adjust and be ready to adjust. There’s a lot of different ways that we can attack them, but the biggest part of it is they’re really, really solid at that end of the floor. We’re going to have to work really hard to get shots, and when we get them, we got to make them.” 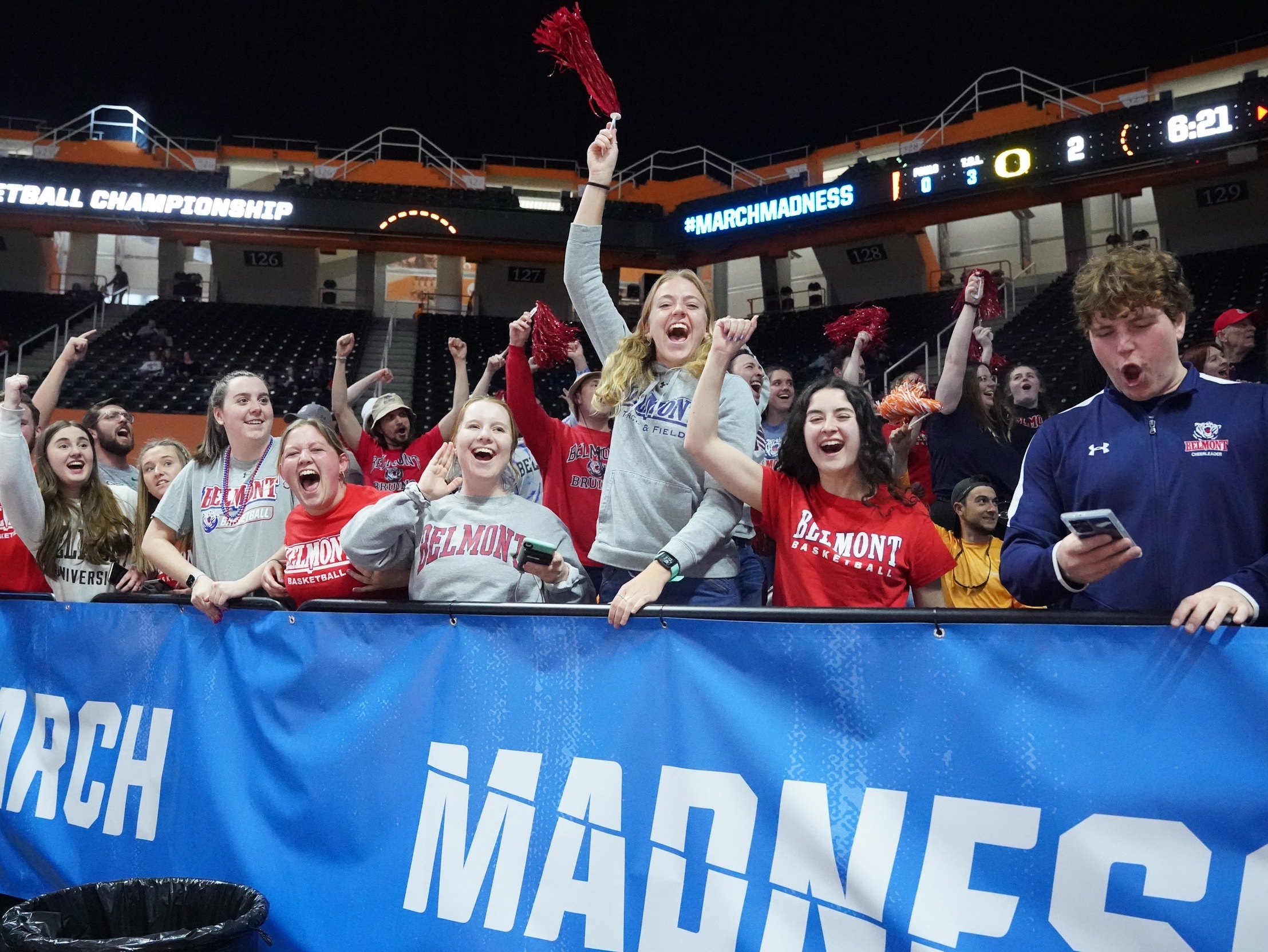 The game will be historic, regardless of the result. If Belmont pulls off the win, it will be a massive upset and will be the first time in program history that a team heads to the Sweet Sixteen. If the Lady Vols win, it’ll be their first Round of 32 win in their last four tournament appearances.

“We’ve got an unbelievable baseball coach, Coach [Dave] Jarvis who told me pressure is like unicorns and dragons. Doesn’t exist. It’s not real. It’s in the mind,” he added. “Players and programs handle that differently, but we’ll try to use that to our advantage the best we can.”

Tennessee will take on the Bruins on their home court in Knoxville tonight at 6 p.m. and will be aired on ESPN.