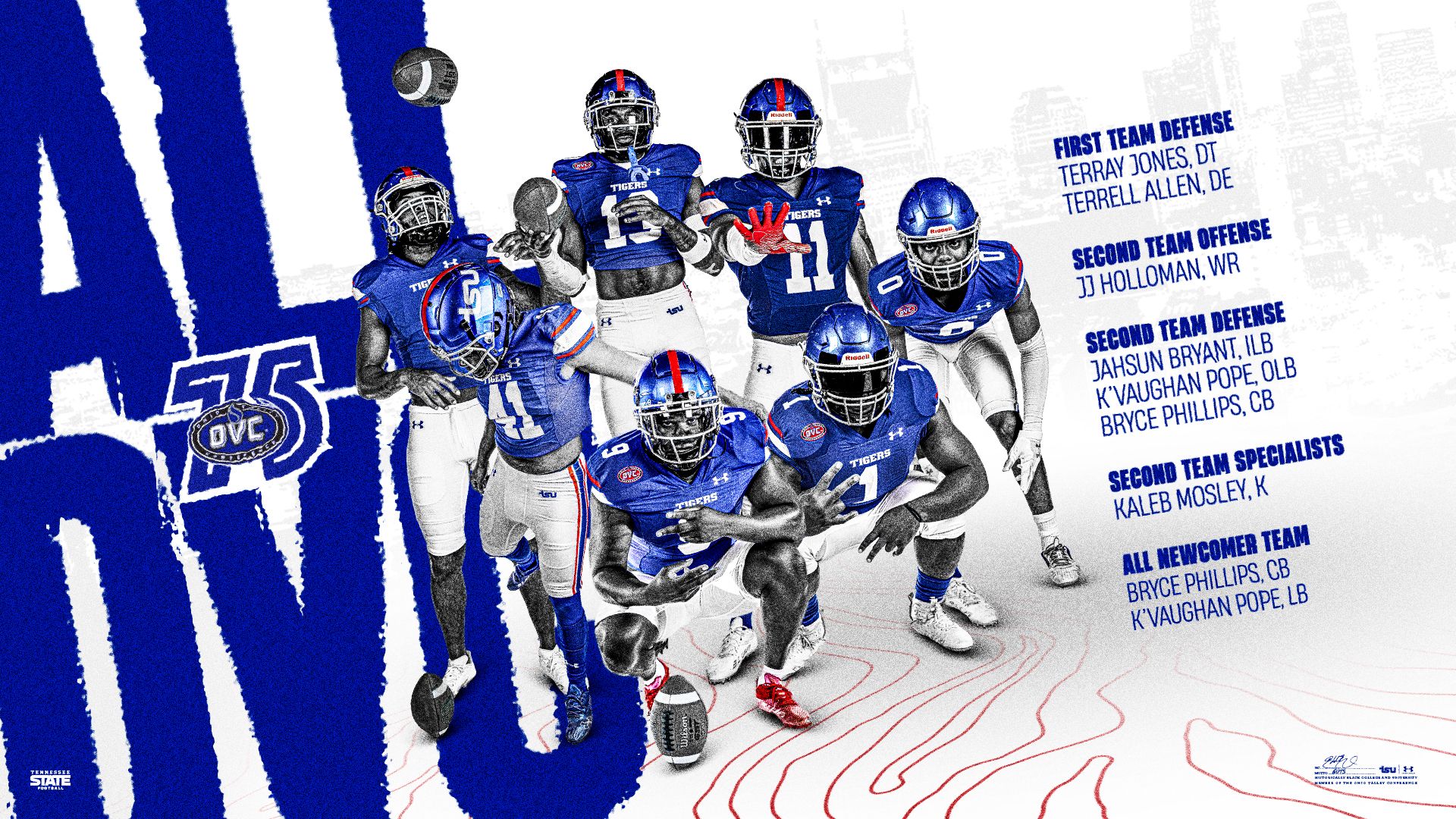 Seven members of the Tennessee State football team earned All-OVC honors as the Tigers finished their season on Nov. 19 with a win against Texas A&M-Commerce.

Jones wreaked havoc on offensive linemen all season long alongside teammate Allen. Jones finished with a career-high 37 tackles on the season (12 solo, 25 assists). He tallied four sacks, 6.5 tackles for loss, forced one fumble, and had three quarterback hurries. Jones finished with a season-high eight tackles against Murray State, while he recorded seven tackles, 2.0 for loss, and one sack against Lane College.

Transfer defensive end Allen made a big impact from his defensive end position in his first year as a Tiger. He finds himself on the All-OVC First Team Defense after earning second-team honors last season at Austin Peay. Allen finished the year with 36 tackles (20 solo, 16 assists), while leading the team in tackles for loss (12.0), and finishing tied-in sacks with 4.5. He also swatted down two passes and had seven quarterback hurries. Allen dominated UTM’s offensive line, collecting nine tackles, 4.5 tackles for loss, and one sack. He finished with 3.0 tackles for loss and 2.0 sacks against EIU.

First-year wide receiver Holloman lands on the Second Team Offense after leading TSU in receptions (33) and yards (353). The senior from Georgia had one receiving touchdown. Holloman’s best performance came against Murray State as he hauled in nine passes for 94 yards.

Senior linebacker Bryant closes his TSU career with Second Team Defensive honors after leading the Tigers in tackles. Playing and starting in all 11 games, the Nashville native racked up a career-high 88 tackles (39 solo, 41 assists) in his final season. He finished with 5.0 tackles, for loss, two interceptions, one forced fumble, and one fumble recovery.

Playing in all 11 games in his first year as a Tiger after transferring in from Santa Ana College, cornerback Phillips rounds out TSU’s All-OVC Second Team Defense selections. The California native led the team in pass breakups with 10, while collecting 35 tackles (27 solo, eight assists).

In his first season handling both punting and kicking duties, Mosley made a smooth transition in taking over for former All-OVC kicker Antonio Zita. He earns Second Team Specialist as a kicker. Mosley finished the year 15-of-21 on field goal attempts, while also knocking through 18 extra point attempts. Mosley had a long of 51 against Lane and had a 47-yarder against TAMUC in the season finale. He finished 3-of-3 against EIU and TAMUC.