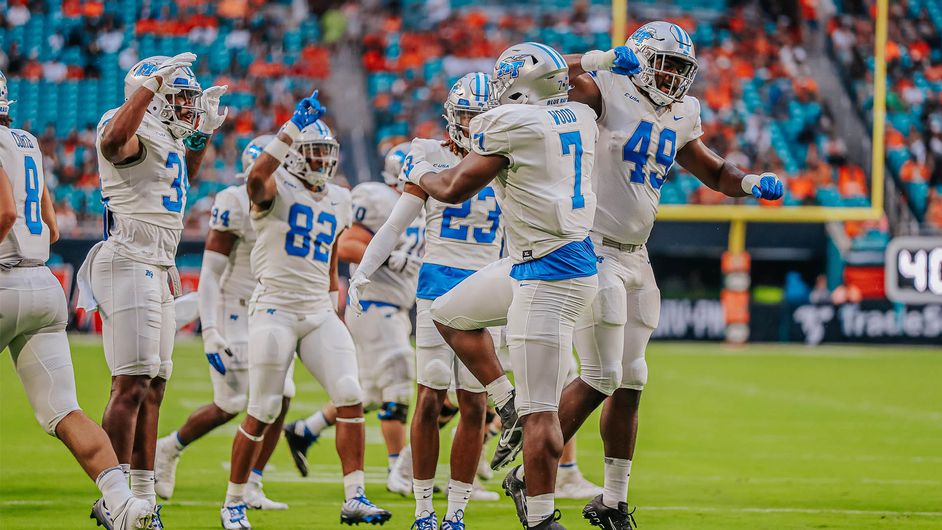 In an absolute stunner, Middle Tennessee State University (MTSU) football takes down No. 25 Miami 45-31, the first win against a ranked team in Blue Raiders’ history.

“It was a fantastic win. I’m extremely proud and happy for our players,” said head coach of 17 years, Rick Stockstill post-game. “It’s always fun to do stuff that no one thinks you can do. Coming down here 26-point dogs and kicking their butt like we did… there was no fluke to this. I’m just really proud of our team. We were the tougher team here tonight, mentally and physically.”

The Blue Raiders came out of the gate hot with two interceptions, one by Decorian Patterson and a pick-6 by defensive lineman Zaylin Wood, which helped solidify a 17-3 first quarter lead. MTSU led at halftime with a 24-10 lead which they would never give up.

MTSU redshirt sophomore quarterback Chase Cunningham threw for a career best 408 yards with three touchdowns, one of which was a 98-yard touchdown pass to DJ England-Chisolm to take a 38-24 lead early in the fourth quarter.

The icing on the cake for this win is that Miami paid MTSU $1.5 million and $40,000 in travel expenses to play the Hurricanes at Hard Rock Stadium on Saturday, Sept. 24.

“We set the tone early, especially on defense,” Stockstill noted. “We never flinched. That’s what I’m proud of. We knocked these suckers off.”

The Blue Raiders are now 3-1 this season as they begin conference play. They face Conference-USA rival University of Texas at San Antonio (UTSA) at Floyd Stadium on Friday, Sept. 30 in the program’s annual Blackout Game. Kickoff is scheduled for 6:30 p.m. CT on CBS Sports Network and the Blue Raider Radio Network.