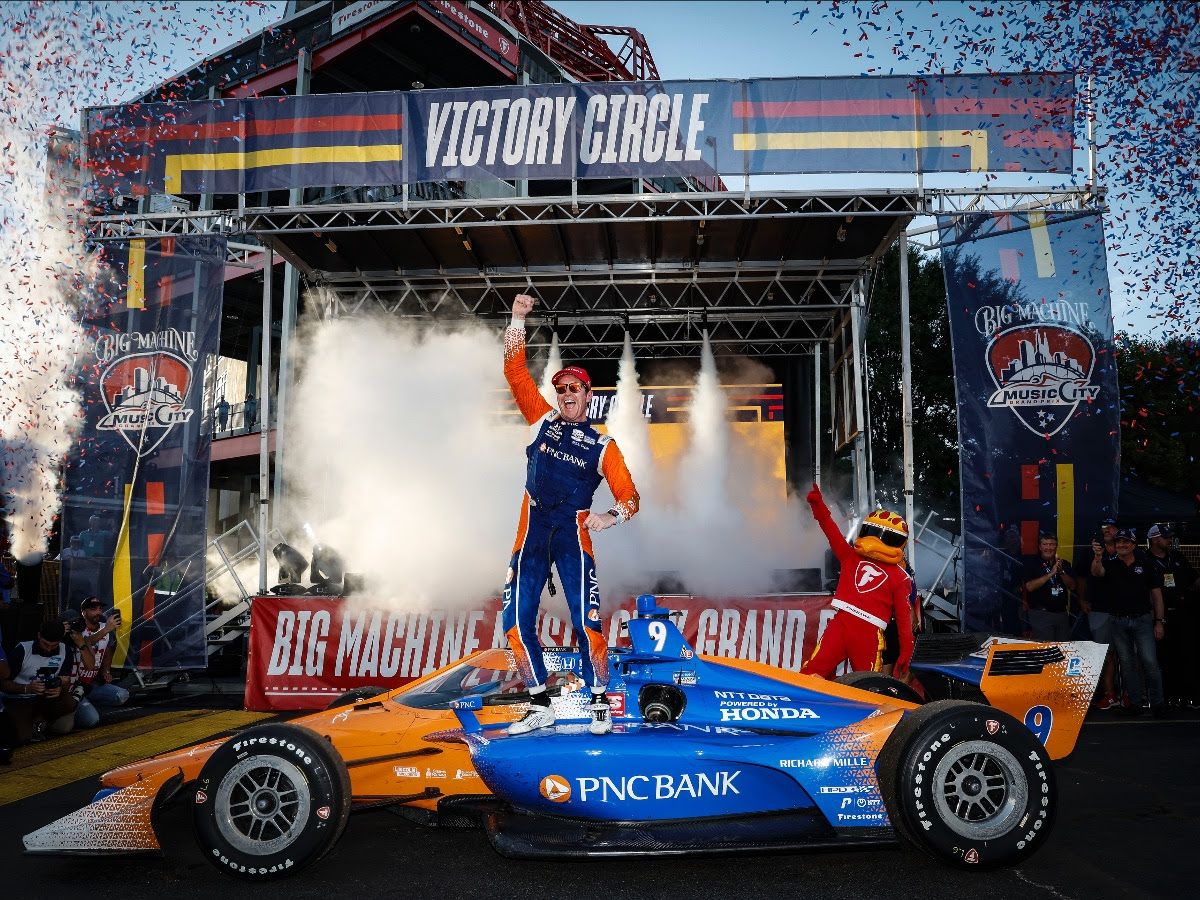 After finishing second in 2021’s inaugural race, Scott Dixon is victorious after winning the 2022 Big Machine Music City Grand Prix on Sunday, Aug. 7, also managing to break the record for second-most IndyCar wins ever with 53.

Dixon picked up his second win of the season and moves closer to the top of the points standings after winning the fourth closest road/street course race in IndyCar history, edging fellow Kiwi Scott McLaughlin by 0.106 seconds.

“It was a wild day,” Dixon expressed in a post-race press conference. “These races can be all over the map and we had a really fast car all weekend. We never really got two consecutive laps together. We got kind of hosed in qualifying and I was so angry after qualifying because I knew we had great speed.

“This race is tough to read. Last year was much the same for us where we just tried to stay out of trouble,” he added.

Dixon started the race in 14th and found some trouble during his first pit stop. But after a handful of cautions and some golden opportunities, the Chip Ganassi driver was able to find himself in the front and hold off the rest of the field.

Like last year, the 2022 MCGP had a ton of cautions–eight to be exact–and one red flag, which came with just four laps to go. At this point, Dixon had the lead, but the pole winner McLaughlin was in second and had a fast car all weekend. 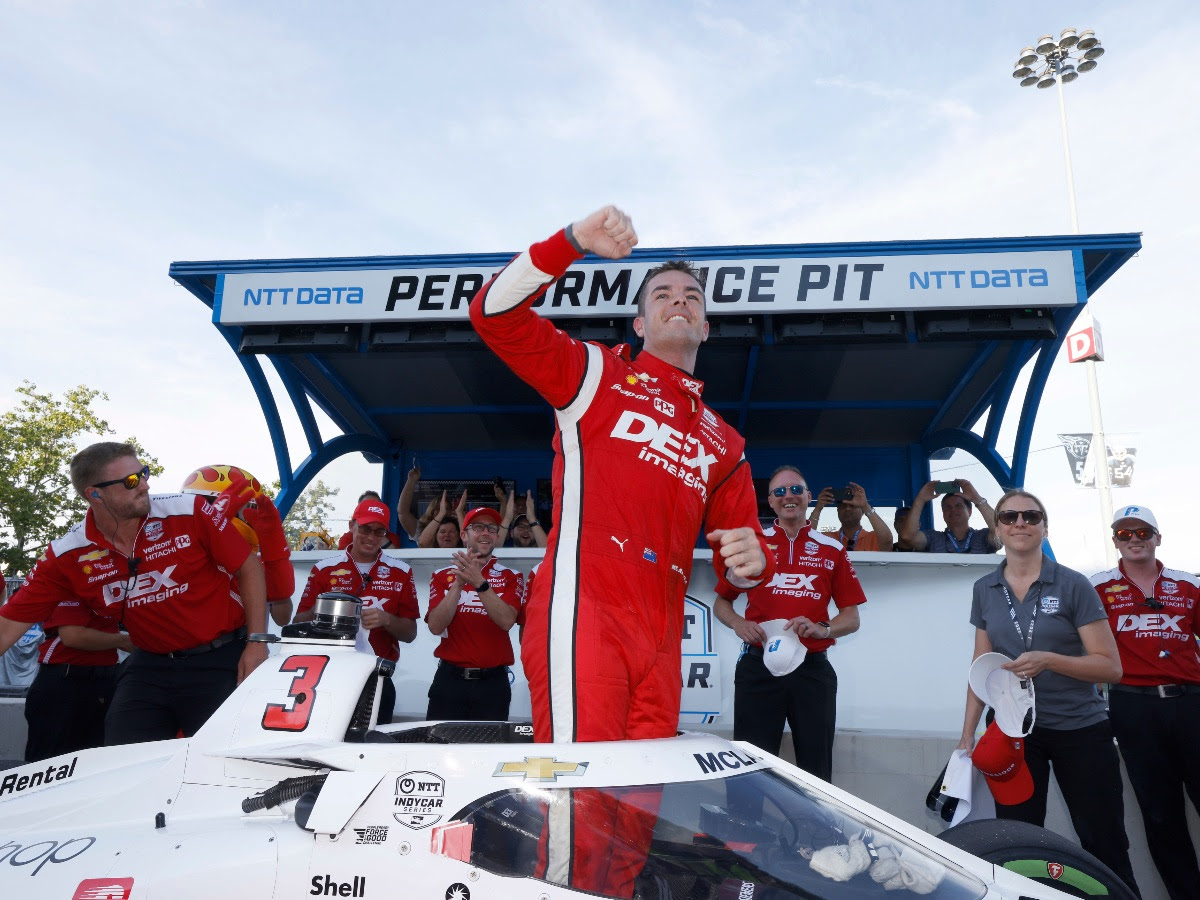 Scott McLaughlin celebrating his pole at the MCGP. Photo: Courtesy of the Music City Grand Prix

“Even though it didn’t work out in my favor, that was one of the most fun races of my career and one of the best race cars we’ve ever had,” McLaughlin noted post-race. “The car was so good, I had so much fun.

“Today I had a full go with [Dixon] and it was awesome. That was probably one of the top-three best moments in my career.”

The red flag prevented the race from finishing under caution, which allowed for a dramatic and entertaining finish. Dixon was satisfied with that decision but knew that the final restart would be extremely difficult.

“Ultimately, that last lap and a half for me was just so tough,” Dixon explains, “and that’s how it should be.”

The red flag came out after an accident between Nashville native Josef Newgarden and Romain Grosjean when Newgarden pushed Grosjean into the wall on turn nine coming off the Korean War Veterans Memorial Bridge. 2021 Big Machine Music City Grand Prix winner Marcus Ericsson was also involved in the wreck and had mechanical failures that made him unable to finish the race.

Newgarden had a great race, leading 12 laps and finishing sixth. His collision with Grosjean stirred up a bit of drama on social media with fans and drivers going back and forth arguing as to who was at fault.

“Welcome to IndyCar, it gets tight,” said Newgarden in a post race interview with NBC. “He’s been on a worse end of that, I don’t know what to tell him. Good thing I was ahead.”

The day started off extremely hot and muggy, but the track cooled off a bit after a weather delay pushed the race back from 2:30 p.m. to a 4:10 p.m. start.

Over 20 laps were raced before the first caution was waved and, after that point, flashbacks from last year’s yellow flag-filled race came back to haunt the drivers and fans. By lap 52, Pato O’Ward, Takuma Sato, Devlin DeFrancesco and Graham Rahal were all knocked out of the race due to collisions.

Last year’s pole winner Colton Herta started off the race all the way back in 23rd place and, within the first few laps, received nose damage forcing him to the back of the field and going a lap down. This didn’t stop the Andretti Autosports driver from fighting all the way back to finish fifth.

The Big Machine Music City Grand Prix may be a defining race this season as it was the fourth to last race of the year. Now with three races left, first place and fifth place in the points standings are only separated by 33 points.