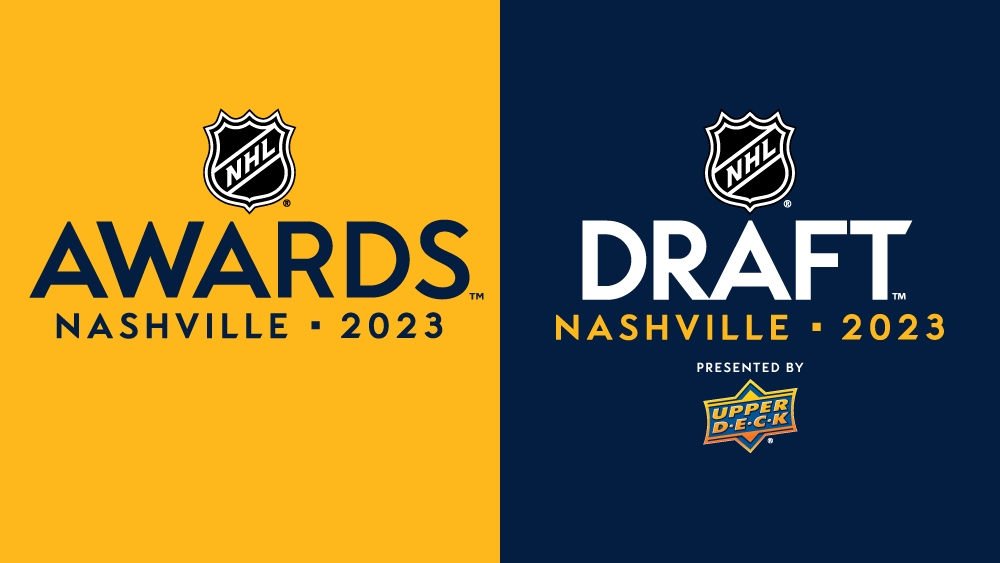 The National Hockey League has announced that the city of Nashville and the Predators will host the 2023 NHL Awards and the 2023 Upper Deck NHL Draft.

This will be the first time both events have been held in the same city since 2006, when the NHL Awards and the NHL Draft both were held in Vancouver.

“We are thrilled to bring two of our marquee events – the 2023 NHL Awards and the 2023 NHL Draft – to Nashville, a special city that certainly knows how to throw a great party,” says NHL Commissioner Gary Bettman. “From the 2003 NHL Draft to the 2016 NHL All-Star Weekend to the 2017 Stanley Cup Final to the 2022 NHL Stadium Series game, the city, the Predators organization and the Country Music community have overwhelmed the NHL with their welcome and support every time Nashville has hosted a League event. We cannot wait to return next June to celebrate the stars of our game and introduce the next generation of NHL Players.”

The 2023 NHL Awards are scheduled for Monday, June 26, marking the first time the event has taken place in Nashville. The NHL Awards will again honor the best regular-season players in a wide range of categories, including most valuable player (Hart Trophy), outstanding goaltender (Vezina Trophy), outstanding defenseman (Norris Trophy) and outstanding rookie (Calder Trophy); the Ted Lindsay Award, which is presented annually to the “most outstanding player” in the NHL, as voted by fellow members of the National Hockey League Players’ Association (NHLPA), also will be awarded.

“We want to thank and show our appreciation for the NHL, leadership from the City of Nashville and State of Tennessee and the Nashville Convention & Visitors Corp for bringing the NHL Draft and NHL Awards to Nashville,” says Predators President and CEO Sean Henry. “Time and time again, our teams have come together to create new ways to present the biggest showcases in our sport by allowing the unique passion of our fans to shine through. It’s been more than 15 years since these two events were hosted in the same city in the same year – next June, we are penciling that week with Smashville as the center of the hockey world. It will let hockey fans worldwide celebrate the best in our game and welcome its future stars right here in the heart of Music City.”

The 2023 Upper Deck NHL Draft will be hosted by the Nashville Predators and will be held at Bridgestone Arena over two days: Wednesday, June 28 (Round 1, televised on ESPN, Sportsnet and TVA Sports) and Thursday, June 29 (Rounds 2-7, television information to be announced when available). NHL club executives, scouts and coaches will be present on the NHL Draft floor, while thousands of fans and hundreds of print, television and radio media are expected to attend.  It will be the second time the Predators have hosted the NHL Draft, and marks the 20-year anniversary of the 2003 edition, which was also held at Bridgestone Arena (then known as Gaylord Entertainment Center).

“It is an honor to bring the NHL Draft back to Music City and an even bigger opportunity to host it alongside the NHL Awards,” says Nashville Convention & Visitors Corp CEO Butch Spyridon. “As our partnership with the Preds and NHL continues to grow, we look forward to executing these two world class events next summer. Placed between CMA Fest and the city’s July 4th celebration will only strengthen our summer travel season.”