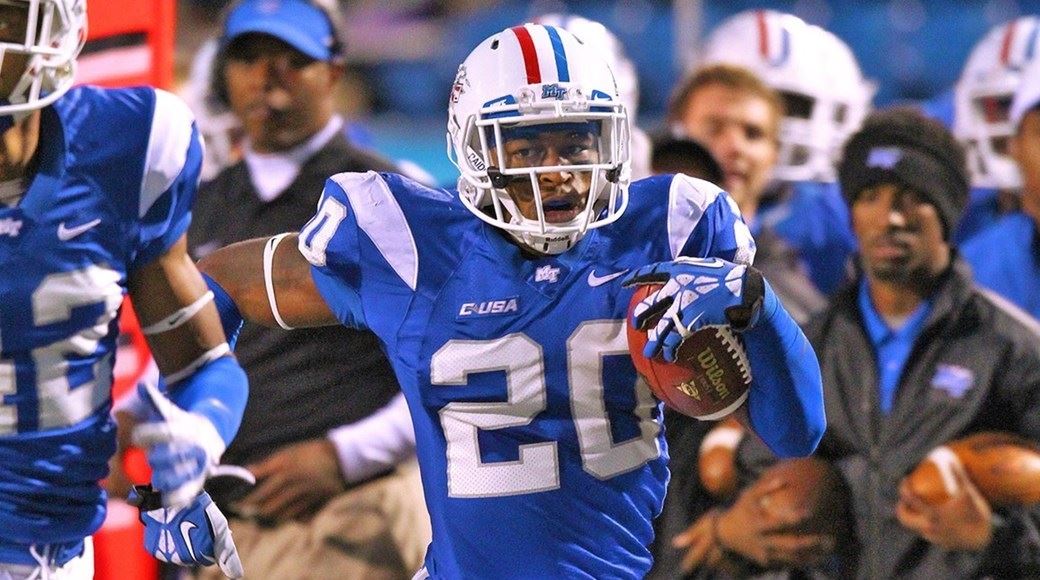 Middle Tennessee legend and Tennessee Titans All-Pro Kevin Byard will have his No. 20 jersey number retired on Sept. 30 during a ceremony at the Blue Raiders’ home game against UTSA.

Byard will join Teddy Morris as the only other player in MTSU football history to have his number retired, whose No. 14 was retired in 1965.

“I am truly honored and blessed to have my jersey number retired at MTSU,” Byard notes. “A lot of blood, sweat, and tears went into making this a reality. Thank you to my coaches, training staff, faculty members, and most importantly my teammates who all played a major role in my success during the five years I attended Middle.”

Byard, a four-year starter for the Blue Raiders from 2012-15, ended his career as the program’s all-time leader in interceptions (19), interception return yards (377), interception return touchdowns (4) and is one of just nine players in school history with 300 or more tackles. A team captain, Byard forced or gained 25 turnovers (19 INT, 5 FF, 1 FR) in 49 career games played.

“This is an incredible honor for any athlete to have their number retired,” says Head Coach Rick Stockstill. “I am very proud of Kevin in what he accomplished here at Middle Tennessee and how he has transitioned into one of the best players in the NFL. More important than his skills as an elite athlete is how he has represented himself, his family, MTSU football and the Titans in a first class manner. KB is very deserving of this honor of having his number hanging in the stadium forever.”

The Lithonia, Georgia native was a first team all-conference selection and an FWAA Freshman All-American while leading the team in interceptions all four years.

“Kevin embodies all of the qualities that warrant having a person’s number retired,” says Athletic Director Chris Massaro. “Kevin is a high character individual who always exhibited a tremendous work ethic. He is a great leader who always gives his all on and off the field. We are very fortunate that Kevin has continued representing our University so well in our local market as a Tennessee Titan. This retirement is in appreciation for all Kevin has done for MTSU and what he continues to do as a Tennessee Titan and beyond.”

Byard was selected with the first pick of the third round in the 2016 NFL Draft by the Tennessee Titans and is now considered one of the top safeties in the NFL. He is a two-time All-Pro pick and was named the team’s Walter Payton Man of the Year winner in 2020 for his work in the community.