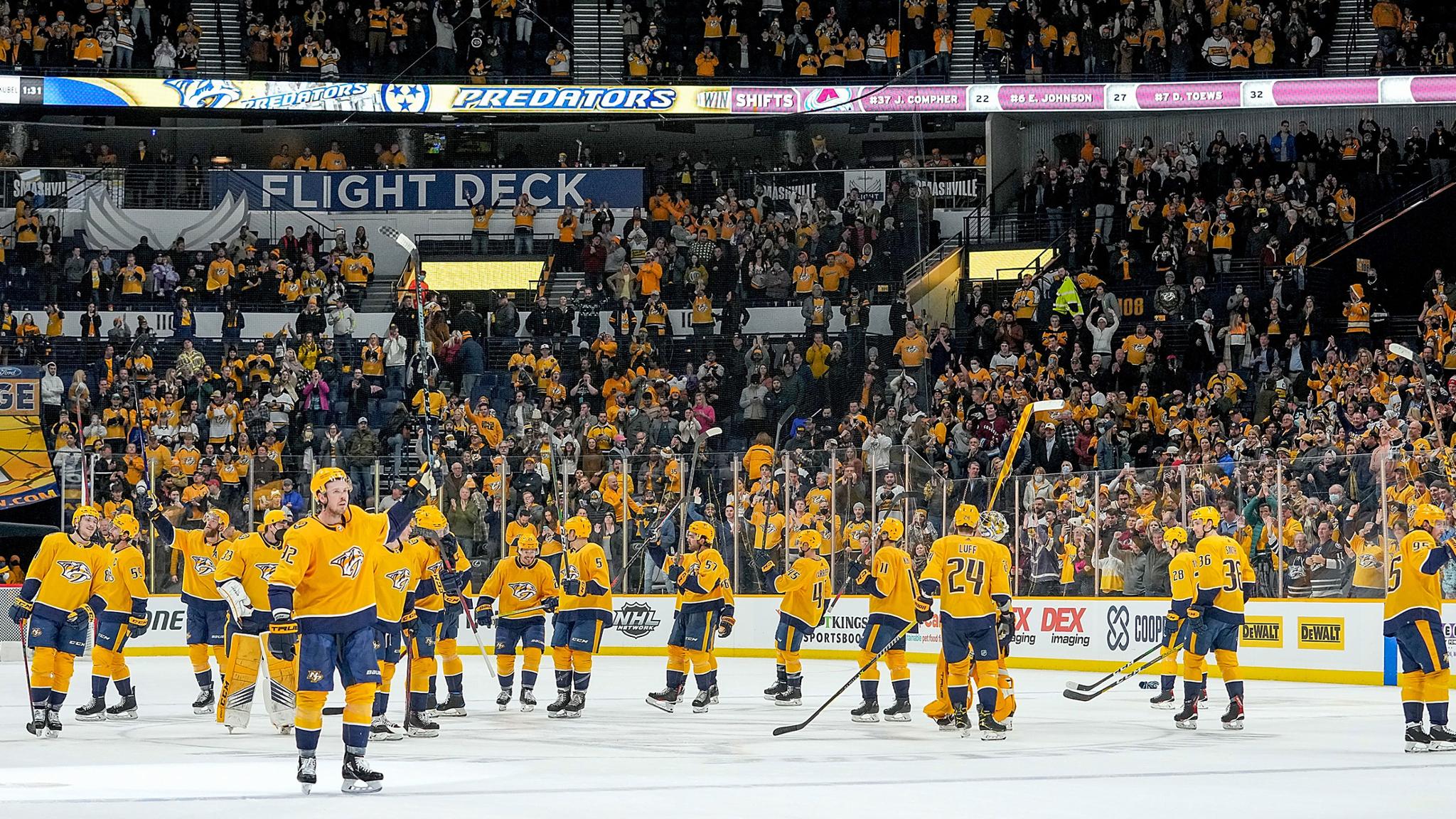 The Nashville Predators have officially dropped their schedule for 2022-23 and will kick off their 25th NHL season by participating in the 2022 NHL Global Series in Prague, Czech Republic, taking on the San Jose Sharks at the O2 Arena on Oct. 7-8.

The Preds will return home on Oct. 13 to play the Dallas Stars at Bridgestone Arena for their home opener. They’ll finish out the opening month of the season with five more games, including home matches against Los Angeles, Philadelphia, St. Louis and Washington from Oct. 18-29 with a one-off road trip to Columbus on Oct. 20.

November will feature 14 games with eight scheduled at Bridgestone Arena, the most home games in a single month on the 2022-23 docket. The month begins with the Preds taking a five-game road swing–the second-longest of the season–with stops in Edmonton, Calgary, Vancouver and Seattle before the trip ends with a Nov. 10 showdown against the defending Stanley Cup champion, Colorado Avalanche.

The schedule shifts back to Tennessee as the Preds will play eight of the final nine games in November at Bridgestone Arena, starting with a season-long five-game homestand from Nov. 12-21. Nashville will take on the New York Rangers, Minnesota, New York Islanders, Tampa Bay and Arizona during the homestand, its longest in a traditional schedule since 2019-20.

A trip to Detroit on Nov. 23 precedes three more November home games, including the first of 11 scheduled back-to-backs coming Nov. 25-26 against Colorado and Columbus; the month concludes Nov. 29 vs. Anaheim. 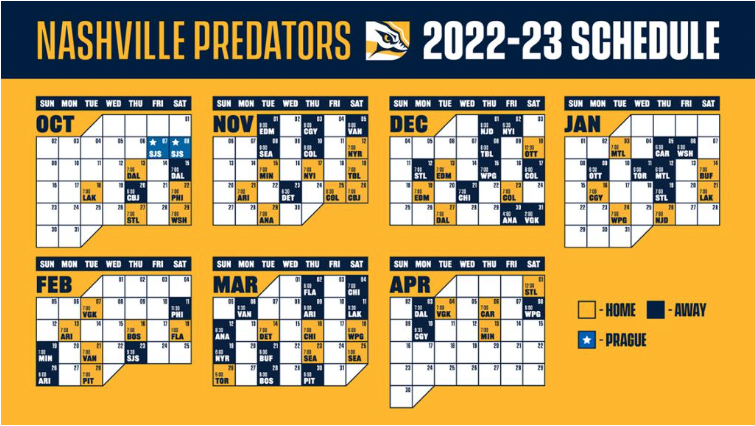 December also will see the Predators play 14 games, six of which will be in the form of back-to-backs, beginning with contests at New Jersey and the New York Islanders on Dec. 1-2. Nashville will then travel to Tampa Bay (Dec. 8)–Ryan McDonagh’s first game back in the city where he won two Stanley Cups.

Nashville kicks off 2023 by taking on Montreal at home on Jan. 3 before embarking on another five-game road trip from Jan. 5-12 with games against Carolina, Washington, Ottawa, Toronto and Montreal. Following the road-heavy start to January, the Predators will play five of their next six games on home ice, taking on Buffalo, Calgary, Los Angeles, Winnipeg and New Jersey from Jan. 14-26 with a road trip to St. Louis scheduled on Jan. 19.

The Predators will play 10 times in February, including a stretch of four games in 10 days to begin the month, with contests against Vegas (Feb. 7), at Philadelphia (Feb. 11), Arizona (Feb. 13) and Boston (Feb. 16). A relatively light travel month, Nashville will play its first of two home-road back-to-backs on Feb. 18-19–home vs. Florida and on the road at Minnesota–before rounding out February with two games at Bridgestone Arena on Feb. 21 vs. Vancouver and Feb. 28 vs. Pittsburgh and contests at San Jose (Feb. 23) and at Arizona (Feb. 26).

March is both the busiest month overall and on the road for the Predators in 2022-23, featuring 16 games total with 10 away from home. The month begins with a season-long six-game road trip from March 2-12 that spans 11 days and will see the team go coast-to-coast, with contests against Florida, Chicago, Vancouver, Arizona, Los Angeles and Anaheim. After completing its final trip out west, Nashville returns home for three games against Detroit, Chicago and Winnipeg from March 14-18 and heads back out on the road at the New York Rangers (March 19) and Buffalo (March 21).

Nashville will take on a Central Division opponent in four of their final seven games of the regular season, starting with a noon contest against St. Louis on April 1. Following a road-home back-to-back on April 3-4 (at Dallas and vs. Vegas), the Predators host Carolina on April 6 and play their final two games away from home on April 8 at Winnipeg and April 10 at Calgary. Nashville concludes the 2022-23 regular season at home on April 13 against Minnesota.