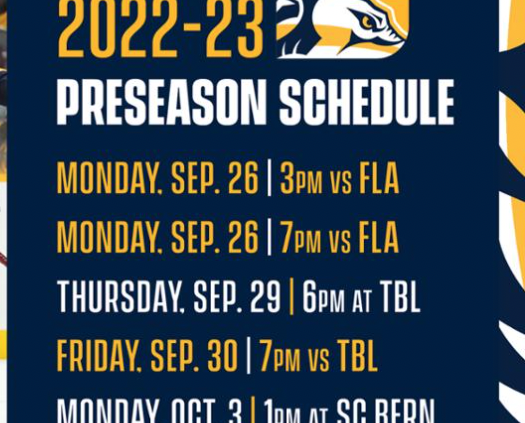 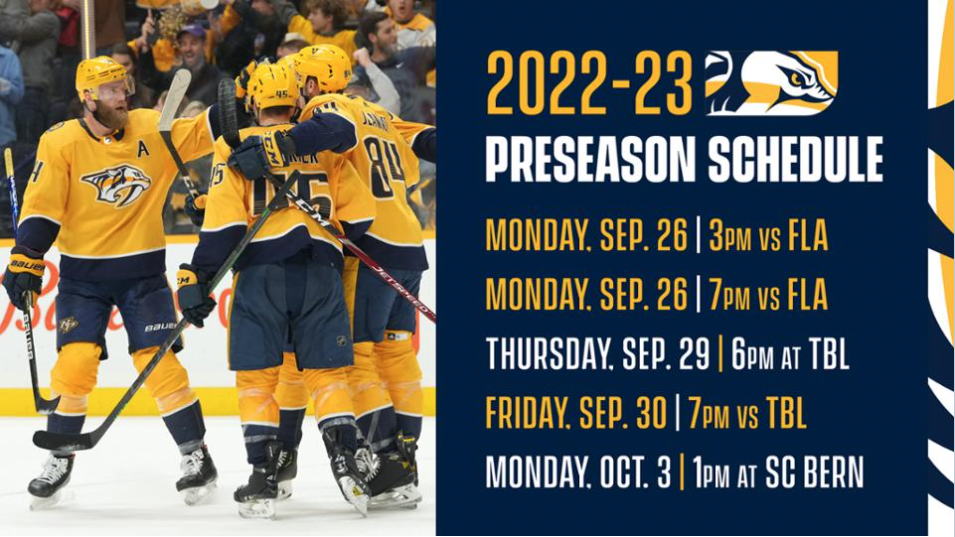 The Nashville Predators have announced its five-game 2022 preseason schedule, headlined by an exhibition in Bern, Switzerland on Oct. 3, as part of the 2022 NHL Global Series.

The Preds’ preseason will also feature a home doubleheader against the Florida Panthers and a home-and-home series with the 2022 Eastern Conference Champions Tampa Bay Lightning.

This will mark the 10th time in the last 11 training camps that the Predators and Panthers will play a split-squad doubleheader. The 2022 edition is scheduled for Sept. 26 at Bridgestone Arena with games at 3 p.m. CT and 7 p.m. CT. Later, Nashville will face off against the Lightning in a back-to-back games, traveling to Tampa on Sept. 29 and hosting the Stanley Cup finalists at home on Sept. 30.

Following that game, the Predators will head for Europe to participate in the Global Series, making stops in Switzerland and the Czech Republic. The Predators will take on SC Bern, located in the hometown of Nashville Captain Roman Josi, on Oct. 3 at PostFinance-Arena, marking the team’s first-ever game against a non-NHL opponent. Nashville then travels to Prague, Czech Republic, for the start of the 2022-23 regular season, where it will play back-to-back games vs. San Jose at the O2 Arena on Oct. 7-8.

The team’s 2022 rookie camp is scheduled to open Sept. 14 in Nashville. The group will take part in a rookie tournament in Raleigh, N.C., from Sept. 16-19 before joining Nashville’s main training camp.

Tickets for the Predators’ three preseason home games will go on sale at a later date and will be available through Ticketmaster.com.