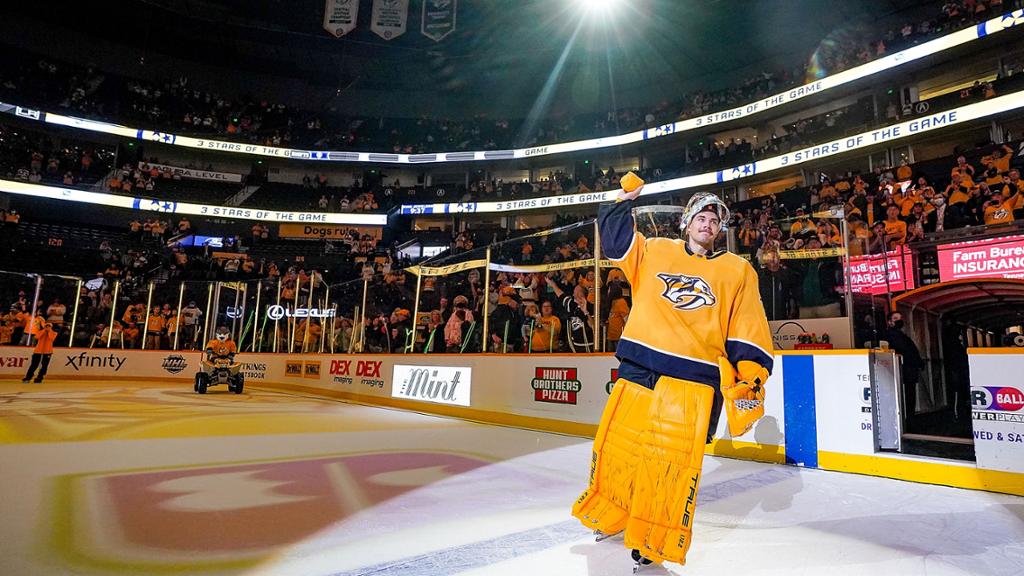 Predators goaltender Juuse Saros has been named a finalist for the 2021-22 Vezina Trophy for his incredible performance on the ice this season.

This announcement comes a day after teammate Roman Josi was named a finalist for the Norris Trophy.

Saros had big shoes to fill after future Hall of Famer Pekka Rinne announced his retirement last season, but he did not disappoint, recording 38 of the Predators’ 45 wins, the highest percentage (84.4%) among all NHL goaltenders.

His skill was one of the biggest reasons the Predators made their eighth consecutive playoff berth. Saros led the NHL in appearances (67), all of them starts, and total ice time (3,931:23); ranked second overall in shots against (2,107) and saves (1,934); and third in wins. The 27-year-old also won three of his four shootout appearances, stopping 11 of 12 attempts for a .917 save percentage.

Saros (38-25-3, 2.64 GAA, .918 SV%, four shutouts) is a first-time Vezina Trophy finalist and joins Rinne as the second goalie in franchise history to be honored. Rinne was a four-time Vezina finalist, capturing the award in 2017-18, finishing second twice and third once.

Saros sustained an ankle injury in one of the last games of the regular season and was unable to play for Nashville during the playoffs.

The Calgary Flames’ Jacob Markstrom and Igor Shesterkin of the New York Rangers join Saros as the other finalist for the trophy.

The winners of the 2022 NHL Awards will be revealed during the Conference Finals and Stanley Cup Final, with exact dates, format and times to be announced later this month.