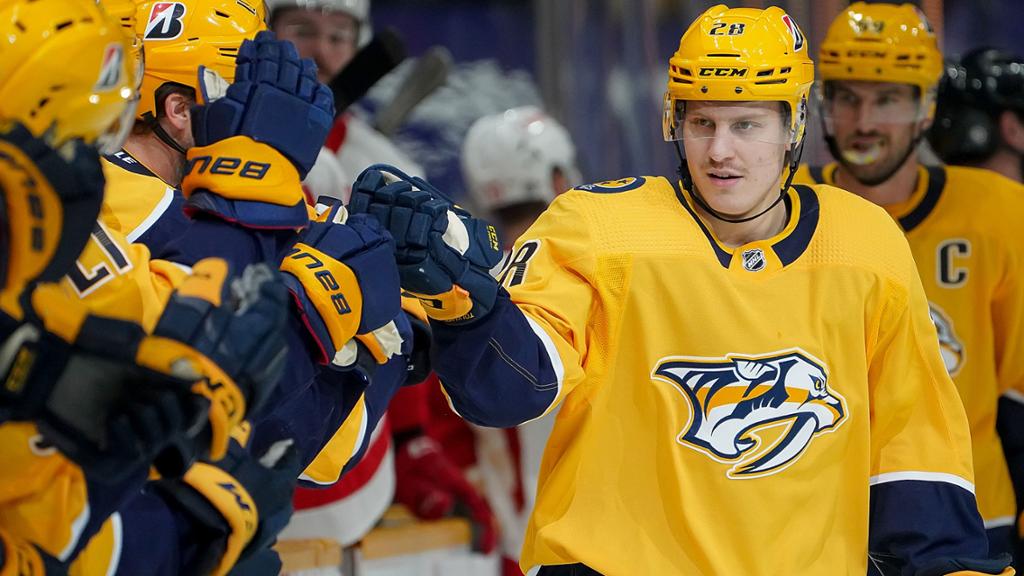 The Nashville Predators have been flexing their muscles on both sides of the ice in early December after winning eight of their last 11 games, including a four-game win streak, all of which were on the road. The team finds itself in second place in the Central Division with 35 points.

Prior to hitting the road on Dec. 7 against the Detroit Red Wings, the Preds picked up late November wins against he Ducks, Devils, Blue Jackets and Canadians.

The Predators handled Detroit with ease, winning 5-2. The team’s goal scorers were Nick Cousins, Eeli Tolvanen, Dante Fabbro and Roman Josi. Both Fabbro and Josi played excellent, having a pair of assists along with their goals. Back-up goalie David Rittich was called up to start for the Preds and had a masterful performance, only giving up two goals.

“David is going to be a guy that’s going to have to play for us whether Juuse [Saros] is out or in back-to-back starts. You need two goalies in this league,” said head coach John Hynes in a post-game press conference. “Overall I thought it was a good team effort.”

The task against the New York Islanders was not as easy.

Nashville left Long Island with a 4-3 victory, which took a lot of effort to pull off the comeback. Rittich struggled, giving up an early goal in the first period and then two back-to-back goals in the third. The Predators offense bailed out Rittich in this match.

Nashville scored twice in the first period to lead 2-1, but found themselves down 3-2 with about 12 minutes left in the third period. A Yakov Trenin goal tied things up. With 12 seconds left in the game, Roman Josi made a pass to Tolvanen to score the game winner.

Josi, Tolvanen and Trenin all scored for the Preds in its win against the New Jersey Devils. Saros was back for the team, blocking unbelievable shots and frustrating the opponent. He only gave up two goals, while saving 29 shots. The second goal he conceded came in the lat minute play when the Preds had already secured the victory.

The Preds finished off the road series with a tough fought 1-0 win against the red-hot Rangers at Madison Square Garden. The game on Sunday, Dec. 12, was the “Jusse Saros Show” when he took on one of the best offenses in the league, blocking all 32 of New York’s shots. Philip Tomasino scored the only goal of the night in the second period, helping lead the Preds to victory.

“I liked the mental focus of the guys: the fortitude to be ready to go and ready to start the game. I liked the energy in the room,” said Hynes in a postgame press conference. “It was a hard fought battle and we found a way to do it.”

The Predators’ game against Calgary on Wednesday, Dec. 14 has been postponed due to a Covid outbreak in the Flames clubhouse. Nashville will now take on Colorado on Thursday, Dec. 16 before immediately hitting the road again to face Chicago on Friday and Carolina on Sunday.