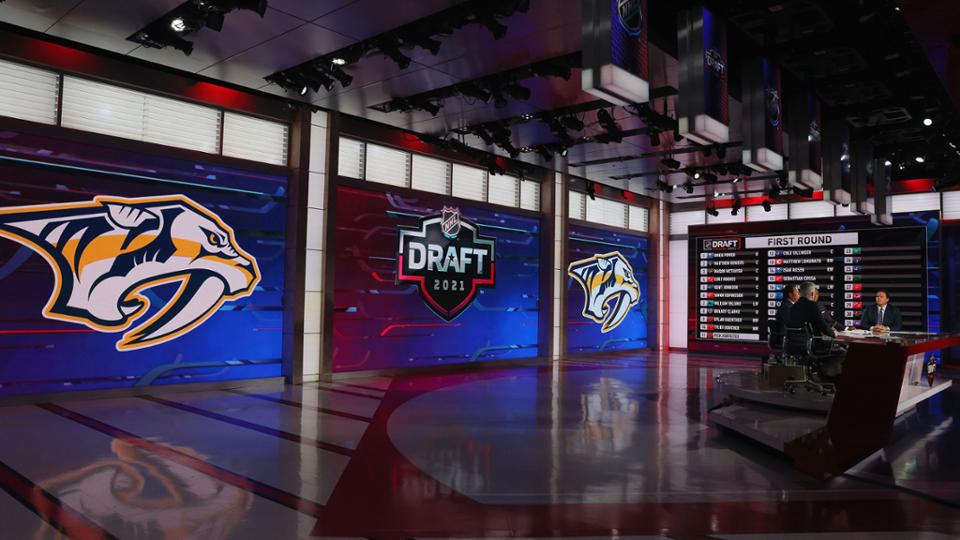 The Nashville Predators made six selections in the 2021 NHL Draft over the weekend (July 23-24) taking three forwards and three defensemen, including forward Fedor Svechkov from Lada Togliatti of the Russian second league with the 19th overall pick.

“We were very pleased with the way this year’s draft went,” says Predators Assistant General Manager/Director of Scouting Jeff Kealty. “Before the draft we tried to implement a strategy and go into it with that in mind, and we felt we did that. We’re very excited about everyone we picked.”

Predators took two players in the first round of the draft for just the second time in franchise history and the first time since 2008. Svechkov, 18-years-old, was the sixth-rated European skater in NHL Central Scouting’s pre-draft rankings and is the second consecutive Russian-born player selected in the first round by the Predators after the team picked goaltender Yaroslav Askarov at No. 11 overall in 2020. The forward spent most of the 2020-21 campaign with Lada Togliatti, where he tallied 15 points (5 goals, 10 assists) in 38 games. He also produced at a point-per-game pace for Togliatti’s squad in the Russian junior league, tallying 15 points (4 goals, 11 assists) in 15 contests.

Later in the first round, the Predators selected forward Zachary L’Heureux. The 18-year-old is a product of the QMJHL’s Halifax Mooseheads, where he placed second in the 2020-21 campaign among team skaters in points (39), goals (19) and penalty minutes (47), and was fourth in assists (20). It was the forward’s second full QMJHL season where he tallied 53 points (20 goals, 33 assists) in 55 games as a rookie in 2019-20 with the Moncton Wildcats.

“We were very high on Zachary, and the reason is simple–he brings something different to the game,” says Predators North American Amateur Scout Dave Westby. “He has got a unique package of skill, grit and character. He’s hard to play against and he’ll be there for his teammates. We felt players like him are hard to find, and when you add in the skills he has, we are pretty excited to have been able to draft him.”

In the thirds round, the Preds selected defenseman Anton Olsson from Malmö of the Swedish Hockey League as the 72nd pick. Olsson, 18, skated in his first full SHL season in 2020-21 and appeared in 39 games. Later, Nashville selected defenseman Ryan Ufko from the USHL’s Chicago Steel with its first of two picks in the fourth round (115th overall). Ufko, 18-years-old, is currently attending USA Hockey’s World Junior Summer Showcase before entering his freshman season at UMass Amherst in the fall. The right-shot blueliner won the USHL’s Clark Cup with Chicago in the 2020-21 campaign after posting 39 points (10 goals, 29 assists) in 53 games.

With their second pick of the fourth round (124th overall), the Predators selected 6-foot-4 defenseman Jack Matier from the OHL’s Ottawa 67’s. He only skated in seven games this season–all coming at the 2021 World U-18 Championship–due to the OHL canceling its campaign. He is a year removed from posting nine points (9 assists) in 56 contests as a rookie with Ottawa in 2019-20. With its final pick, the Predators selected Zurich, Switzerland, native Simon Knak in the sixth round with the 179th pick. Knak, 19-years-old, split the 2020-21 campaign between the WHL’s Portland Winterhawks and the Swiss National League’s HC Davos, appearing in a combined 49 games. He made his National League debut skating for Davos, where he posted eight points (3 goals, 5 assists) in 25 appearances then spent the remainder of the season with Portland and tallied 29 points (16 goals, 13 assists), five shy of matching his career high of 34 (9 goals, 25 assists) set in 2019-20 in 25 fewer games played.

“We were pretty happy to get him, especially as late as we did,” says Predators North American Amateur Scout Glen Sanders. “He’s a very strong power forward who drives the net. With all the culture-type things we’ve trying to do with this draft, we wanted someone who has character and will, and he has all that.”

Now that the draft has wrapped, the NHL and the Predators are preparing for Free Agency which begins on Wednesday, July 28. With Nashville having contracts that need to be unloaded as well as gaps in their team that need to be filled, it is sure to be an interesting Free Agency period.