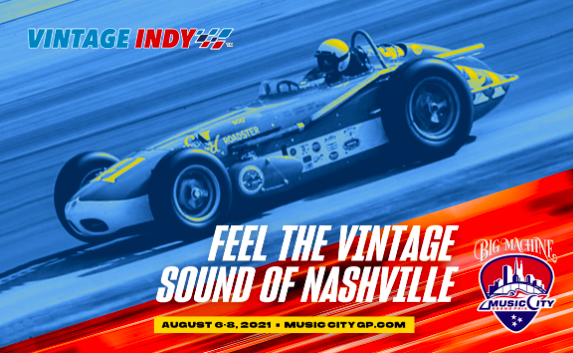 The Big Machine Music City Grand Prix has announced that they will be adding the spectacle of Vintage Indy to their grand prix weekend.

The event will feature a Vintage Indy Paddock and on-track lapping sessions for the historic cars on Sunday’s race day. Two-time Indy 500 winner Al Unser Jr. will lead the field behind the wheel of the Miles Ahead MINI John Cooper Works Hardtop Vintage Indy pace car.

“The members of Vintage Indy, myself and our fans are beyond excited to be participating in the inaugural Big Machine Music City Grand Prix, which undoubtedly is destined to be a fantastic weekend for Nashville and the NTT INDYCAR Series”, says Michael Lashmett, president of Vintage Indy.

The Big Machine Music City Grand Prix now adds a fourth major event to the schedule for Vintage Indy in 2021 which also includes the NTT IndyCar Series Rev Group Grand Prix at Road America on June 18-20 and Bommarito 500 at WWT Raceway on August 19-21, along with the 39th Pittsburgh Vintage Grand Prix on July 24-25.